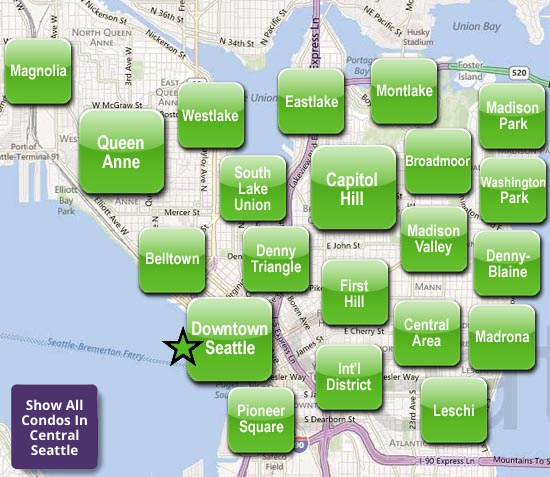 Central Seattle is the core of the Greater Seattle region and has the highest concentration of condos in the county.  Starting in downtown Seattle at the waterfront on Elliott Bay, skyscrapers line the shoreline and present a mix of condos from classic to modern new construction.  Views of Puget Sound, the islands, mountains, and nearby lakes can be found in every direction from Downtown Seattle's condo buildings.

Just north of downtown, Belltown also has a large number of high-rise condos, with quick access to the downtown business district and plenty of entertainment nearby.  Downtown Seattle and Belltown give way to First Hill in the East, which houses a large portion of Seattle's medical buildings and a fair share of condo towers as well.  To the south are Pioneer Square and the International District, each with a strong urban vibe and a mix of small condos and lofts.

As one heads East and North further from Downtown Seattle, condos are more likely to be low-rise and in more residential areas.  Although there are exceptions, popular neighborhoods like Capitol Hill, Queen Anne, Madison Park, Eastlake, and South Lake Union have a large number of low to mid-rise buildings that are still just a quick commute into downtown.

There are a wide variety of condos in Central Seattle, from traditional to foreclosures and short sales scattered throughout.  There are also some unique condos such as the waterfront condominium buildings in lakeside communities like Leschi, Washington Park, and Madison Park.  Central Seattle condos offer views from nearly every neighborhood, and the popularity of these in-city locations create strong real estate values and high demand.

For a full list of all Seattle neighborhoods, use the Detailed Condo Search.