First Hill is part of King County in Seattle. It has a population of 18,614, 84% of the locals are renting, and 16% are owning their homes. First Hill ranked #4 in the best neighborhoods to live in Seattle and has an overall grade of A+. First Hill's Livability Score is 62/100 (considered below average) - it's the #58 ranked neighborhood in Seattle. And the cost of living in First Hill is 9% lower than the Seattle average.

First Hill in Seattle has top-rated schools such as The Northwest School in 1415 Summit Ave located northern First Hill. The Northwest School (206.682.7309 / northwestschool.org) is a private/independent school in First Hill that offers a coeducational international boarding program with 450 students from middle and high schools. Another top-rated private school is the O'Dea High School in 802 Terry Ave located near Frye Art Museum and west of the Seattle University. O'Dea High School (206.622.6596 / odea.org) is a Catholic all-boys high school with 507 students in the year 2020. And the largest institution in First Hill is the Seattle University in 901 12th Ave located western First Hill. Seattle University (206.296.6000 / seattleu.edu) is a private co-ed school that offers graduate degree programs, a law school, bachelor's degree programs, and certificate programs.

If you want to see some historical exhibits, First Hill has Frye Art Museum at 704 Terry Avenue located west of Swedish Hospital and near O'Dea High School. Frye Art Museum (206.622.9250 / fryemuseum.org) is an art museum that offers collections of American & European sculptures and paintings from old times to the present. Another building that shows a historical landmark in the First Hill neighborhood is the Hotel Sorrento. It is located at 900 Madison St, south of Virginia Mason Hospital and Seattle Medical Center, and it's just a 3-min walk from Frye Art Museum. Hotel Sorrento (206.622.6400 / hotelsorrento.com) is an Italian-style hotel that opened in 1909. It is one of the iconic hotels near downtown Seattle that offers vintage rooms with architectural decors for a staycation.

First Hill is located on the South end of Capitol Hill and is one of the livelier central Seattle neighborhoods. Dubbed "Pill Hill" for its plethora of hospitals and medical facilities, there is a wide range of condo and residential options in First Hill. Just east of downtown, the neighborhood provides plenty of nearby businesses and easy access to freeways and entertainment.

First Hill is a neighborhood in Seattle, Washington, named for the hill on which it is located. The hill, in turn, is so named for being the first hill one encounters traveling east from downtown Seattle toward Lake Washington. First Hill is bounded on the west by Interstate 5, beyond which is Downtown, on the north by E. Pike and E. Madison Streets, beyond which is Capitol Hill, and on the south by S. Main St., beyond which is the International District. The City of Seattle provides conflicting information about its eastern limit, beyond which are Cherry Hill and the Central District. Some describe it as being bounded by Broadway and Boren Avenues, while others describe it as being bounded by 12th Avenue. 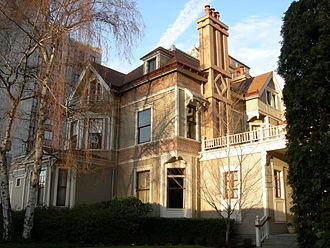 The University Club, in the former Stacy House at the corner of Boren and Madison on First Hill. One of the remaining handful of the grand houses that once characterized the neighborhood.

First Hill rose to popularity in the 1890s as a location close enough to downtown for convenience, but far enough out to offer a sense of retreat for the wealthier residents of Seattle. Among the elite to live on First Hill at that time were Indian fighter turned wealthy businessman Granville O. Haller, local judge Cornelius H. Hanford, successful meatpacker Charles Frye (whose private art collection is now open to the public at First Hill's Frye Art Museum), contractor Morgan Carkeek (for whom Carkeek Park is named), William Boeing, founder of the Boeing Company and Judge Hiram Bond. Noted photographer Imogen Cunningham and her husband Roi Partridge lived on First Hill in a boarding house in the 1910s until the residents of the house were evicted and the property converted into a hospital. More recently, local philanthropist and businesswoman Patsy Bullitt Collins resided in a First Hill condominium.

The first official King County Courthouse was built on First Hill in 1889–1890; the steep climb to the courthouse from downtown legal offices caused such frequent and vociferous complaints that Seattle lawyers nicknamed the area "Profanity Hill". The courthouse, constructed on the corner of 7th Avenue and Alder Street, was quickly outgrown, which, along with the loud dissatisfaction of local attorneys, led the county to move the courthouse off First Hill in 1916.

The hill is also known as "Pill Hill" because, in addition to being the current home of three major health care facilities (Harborview Medical Center, Swedish Medical Center/First Hill, and Virginia Mason Medical Center (four if Swedish Medical Center/Cherry Hill, located on 16th Avenue, is included in the neighborhood)), as well as the Puget Sound Blood Center, it was also once the location of the Maynard, Seattle General, and Doctors Hospitals (all of which merged into Swedish) as well as Cabrini Hospital. 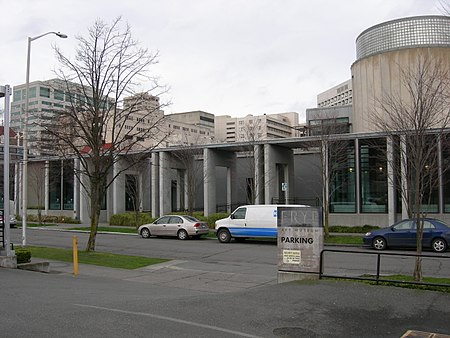 A Link Light Rail station was originally planned for First Hill, but was cancelled due to geotechnical risks prior to the construction of University Link. Instead, the First Hill Streetcar was built on Broadway and Jackson Street to connect First Hill with the International District / Chinatown and Capitol Hill stations after it opened in 2016.