Gig Harbor is a city near Tacoma, WA that is named for the body of water which it surrounds. Seattle-area residents often travel through Gig Harbor on the way to the Olympia peninsula, as it is located just across the main thoroughfare over Puget Sound, the Tacoma Narrows Bridge. Gig Harbor is well known for its shopping, dining, and entertainment, as its beautiful waterfront location and downtown shopping district attract visitors from all over the Northwest.

Gig Harbor is the name of both a bay on Puget Sound and a city on its shore in Pierce County, Washington, United States. The population was 7,126 at the 2010 census. 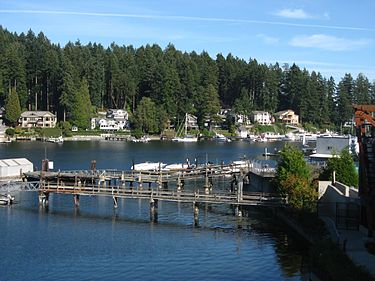 Gig Harbor is one of several cities and towns that claim to be "the gateway to the Olympic Peninsula". Due to its close access to several state and city parks, and historic waterfront that includes boutiques and fine dining, it has become a popular tourist destination. Gig Harbor is located along State Route 16, about 6 mi (10 km) from its origin at Interstate 5, over the Tacoma Narrows Bridge. A $1.2 billion project to add a second span to the bridge was completed in 2007. From Gig Harbor, Tacoma can be reached in under 20 minutes and Seattle in under an hour.

During a heavy storm in 1840, Captain Charles Wilkes brought the captain's gig (small boat) into the harbor for protection. Later, with the publication of Wilkes 1841 map of the Oregon Territory, he named the sheltered bay Gig Harbor.

In 1867, fisherman Samuel Jerisich came to the Gig Harbor area, along with many other immigrants from Sweden, Norway, and Croatia. The town was platted in 1888 by Alfred M. Burnham.

Gig Harbor was officially incorporated on July 12, 1946. Commercial fishing, boat building, and logging dominated the economy until the construction of the first Tacoma Narrows Bridge in 1940. Until then, the primary method of transportation between Gig Harbor and the economic center of nearby Tacoma was by steamship. Starting in 1836, steamships started plying the waters of Puget Sound and quickly developed into what was eventually dubbed the "Mosquito Fleet". Gig Harbor, isolated from Tacoma and Seattle by Puget Sound and the Tacoma Narrows, could not be reached by automobile or horseback except by a very long and arduous trip south around Puget Sound and Hammersly Inlet. The boom was to be short lived, as the first bridge collapsed just months after it was completed. The resource demands of World War II prevented another bridge from being built until 1950. Between the time when the first bridge collapsed and when the second bridge was completed, a state-run ferry service delivered drivers directly into downtown Gig Harbor. Remains of the ferry dock can still be seen just outside the mouth of the harbor at the southeast end of Harborview Drive. The area has been turned into a small park, where the public can see a panoramic view of the Cascade Mountains, Point Defiance, and Mount Rainier.

After the completion of the replacement bridge in 1950, Gig Harbor and the surrounding area quickly began to develop as a suburb of neighboring Tacoma. First, the area had substantial residential development as families retreated from Tacoma in favor of the tree-lined neighborhoods and waterfront lots available on the Gig Harbor Peninsula. What had once been summer cabins became primary residences for people who commuted daily over the bridge to Tacoma. Medium-sized housing development sprang up across the peninsula. The 1980s and 1990s had substantial retail development near State Route 16 to serve the growing residential population, shifting the economic center of Gig Harbor out of downtown. For some time, city leaders were unsure how to handle the growth while maintaining the character of the city. Ultimately, the city decided to aggressively annex the surrounding rural areas and convert them into high-density commercial and housing districts, forever changing the rural character of the area, but assuring that little new development happens in the historic downtown area, preserving its history and charm. By the 1970s, local merchants had begun actively promoting the downtown area for its historic value, and tourism became prominent on the list of economic engines in Gig Harbor. Today, downtown Gig Harbor is a very active place for tourists with shopping, dining, and recreation on every block. The last large swath of undeveloped waterfront property at the south end of downtown was recently developed into the headquarters of the Russell Foundation, named for George Russell, founder of Russell Financial.

Today, despite a long history of boat building, very little manufacturing exists in Gig Harbor. The only remaining boatbuilder is Gig Harbor Boatworks, which builds rowing and sailing dinghies in classic style using modern materials. Until recently, Tiderunner Boats maintained a manufacturing facility at the north end of the bay. The historic Skansie boatyard is now primarily a maintenance facility for yachts and pleasure craft. The Glein/Eddon/Gig Harbor boatyard was recently purchased by the city after spending many years sitting idle. The city intends to use it as a working waterfront museum.

Commercial fishing is still of great cultural, if somewhat lesser economic, importance to Gig Harbor, and many commercial fishing boats make it their home port. Most, however, do not rely on Puget Sound to gather their catch, instead finding it more profitable to venture north to Alaska to fish in the summer. Gig Harbor's fishing fleet still gathers the first weekend in June (during the Maritime Gig Festival) in the center of the bay for the annual Blessing of the Fleet ceremony. In recent years, due to the dwindling number of remaining fishing boats, pleasure craft have been allowed to participate in the ceremony, somewhat lessening its authenticity, but increasing its visibility and participation.

A new Tacoma Narrows Bridge has been built alongside the existing bridge and opened July 2007, doubling past capacity.

In 1905, the Skansie brothers were the first in the area to build a gasoline-powered fishing boat. They did so at first by refitting boats with a gasoline-powered engine. Usually the motors were quite small, between 6 and 8 horsepower; the Skansie brothers originally used a 7-horsepower engine. Although these were powerboats, neither masts nor a turntable to hoist in the nets were used. This work was all done by hand. However, with the introduction of a motor, the boats were not able to go as far as Alaska. Skansie shipyards built fishing vessels from the late 1910s to the early 1950s. Vessels built by Skansie: 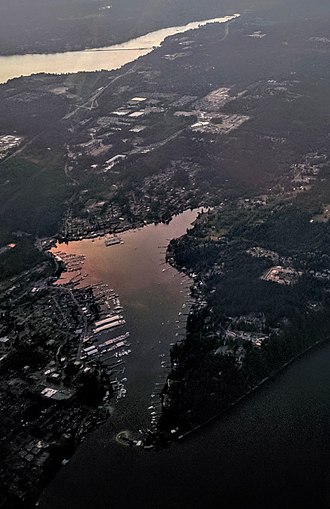 Aerial view, looking northwest, of the harbor and town of Gig Harbor, Washington, with Henderson Bay in the background 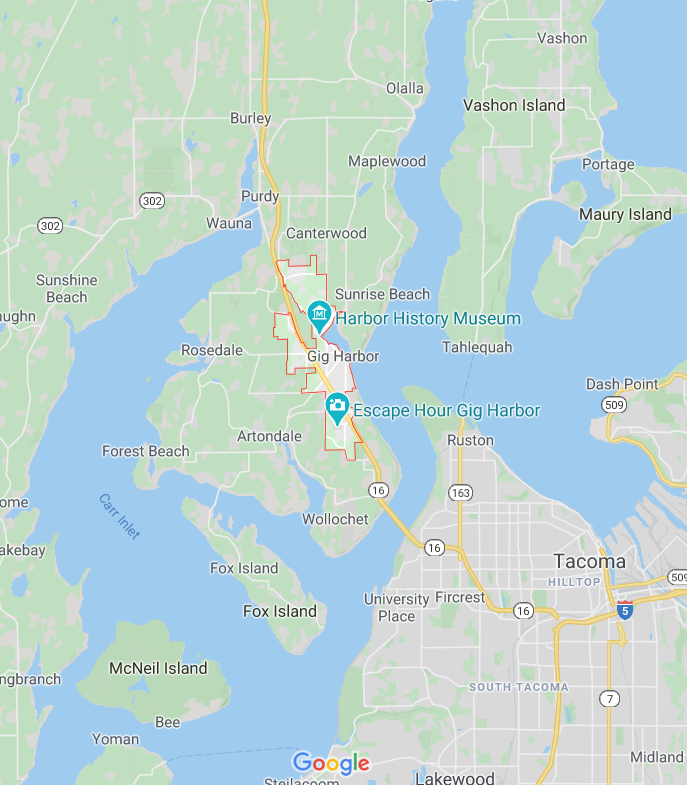 Gig Harbor has a marine west coast climate: Warm and dry summers, transitional springs and autumns, and cool and wet winters, with occasional snow. The annual high and low temperatures of Gig Harbor are 59.3 °F and 44.8 °F, respectively, making for an average of 52.05 °F.

The Peninsula School District is the district covering the city of Gig Harbor and the peninsula.