Waterfront condos are a unique lifestyle option in many parts of Greater Seattle.  Kirkland and many other neighborhoods have some waterfront locations that lend themselves to a waterfront lifestyle that still allows the ease of living that condos provide.  Some condos are simply located on the shoreline of a lake, while others may have access to shared, owned, and community beaches, docks, and moorage, or maybe just a stream or creek.

While there are not always waterfront condos available for sale in Kirkland, check back often as new listings will appear on our site daily.  If you can't find the waterfront condo you're looking for, just Contact Us and we'll do the searching for you.

Kirkland is located just across Lake Washington from Seattle, a short drive across the Highway 520 floating bridge. This lakeside city has one of the most-loved downtown areas in the greater Seattle region, with a mix of upscale shops, unique restaurants, and an "old town feel" that allows for walking to most necessities. Waterfront parks dot Kirkland's shoreline, and waterfront homes give way to upscale neighborhoods near the water and more affordable, suburban neighborhoods heading East. Kirkland is part of the highly-regarded Lake Washington School District, and has a population of around 80,000 residents making it the 12th largest city in Washington. Kirkland was the birthplace of the warehouse chain Costco (ergo the "Kirkland signature" brand), and has a strong business base. Condos in Kirkland are centered around the waterfront, while most inland properties are single family homes.

Kirkland is a city in King County, Washington, United States. A suburb east of Seattle, its population was 93,010 in a 2019 census estimate, which made it the sixth largest city in the county and the thirteenth largest in the state.

Kirkland was the original home of the Seattle Seahawks; the NFL team's headquarters and training facility were located at the Lake Washington Shipyard (now Carillon Point) along Lake Washington for their first ten seasons (1976–85), then at nearby Northwest University through 2007. Warehouse chain Costco previously had its headquarters in Kirkland. While Costco is now headquartered in Issaquah, the city is the namesake of its "Kirkland Signature" store brand.

The land around Lake Washington to the east of Seattle was first settled by Native Americans. English settlers arrived in the late 1860s, when the McGregor and Popham families built homesteads in what is now the Houghton neighborhood. Four miles (6 km) to the north people also settled near what is now called Juanita Bay, a favored campsite of the Natives because a wild potato, "wapatos", thrived there. The Curtis family arrived in the area in the 1870s, followed by the French family in 1872. The Forbes family homesteaded what is now Juanita Beach Park in 1876, and settled on Rose Hill in 1877. Gradually, additional people settled in the area, and by the end of the 1880s a small number of logging, farming and boat-building communities were established. 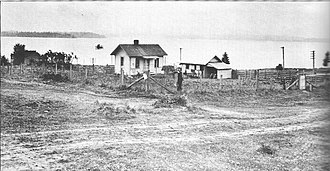 Kirkland in 1912, at the modern-day intersection of Fourth Avenue and First Street overlooking Lake Washington

In 1886, Peter Kirk, a British-born enterprising businessman seeking to expand the family's Moss Bay steel production company, moved to Washington after hearing that iron deposits had been discovered in the Cascade Range. Other necessary components such as limestone, needed in steel smelting, were readily available in the area. Further yet, a small number of coal mines (a required fuel source for steel mills) had recently been established nearby in Newcastle and train lines were already under construction. Plans were also underway to build the Lake Washington Ship Canal.

Kirk realized that if a town were built near the water it would be a virtual freshwater port to the sea, as well as help support any prospective mill. At the time, however, Kirk was not a U.S. citizen and could not purchase any land. Leigh S. J. Hunt, then owner of the Seattle Post-Intelligencer, offered to partner with Kirk and buy the necessary real estate.

Under their new venture, the Kirkland Land and Development Company, Kirk and Hunt purchased thousands of acres of land in what is now Kirkland's downtown in July 1888. Kirk and his associates started the construction of a new steel mill soon after, named the Moss Bay Iron and Steel Company of America. After founding the city of Kirkland in 1888, officially one of the earliest on the Eastside at the time, Kirk's vision of a "Pittsburgh of the West" was beginning to take form. Construction soon commenced on several substantial brick homes and business blocks that would house and serve the steel mill employees. 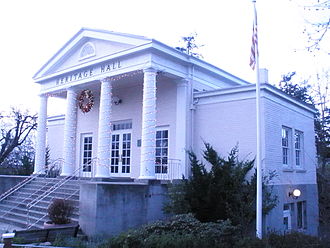 However, the Seattle, Lake Shore and Eastern Railway, which had recently been purchased by Tacoma-based Northern Pacific, had now refused to construct a rail line to the lake. This would, after all, have a negative impact on Tacoma, which was furiously competing with Seattle as the dominant Puget Sound seaport. The ensuing financial issues and numerous obstacles took a toll on Kirk, who was running out of investors. Hunt was also in debt from the purchase of land.

Nevertheless, the plans continued and the steel mill was eventually completed in late 1892 on Rose Hill (a full 2 miles (3 km) from the lake's shore). Financial issues arose and due to the Panic of 1893 the mill subsequently closed without ever producing any steel. In spite of everything, Kirk was determined not to give up on his namesake town, and Kirkland was finally incorporated in 1905 with a population of approximately 532. A final attempt at a steel mill in Kirkland was planned by James A. Moore in 1906. His Northwestern Iron & Steel Company paid $250,000 in cash for a 1,500-acre (6.1 km2) site, but the mill never materialized. This came at the heels of the Pacific Steel Company, incorporated earlier in 1906 by J.F. Duthie, William Calvert and L.S. Cragin. This company soon amounted to nothing.

In 1900 the Curtis family made a living operating a ferry-construction business on Lake Washington. Along with Captain John Anderson, the Curtises were among the first to run ferries in the area. Leschi, first operated on December 27, 1913, was the original wooden ferry to transport automobiles and people between the Eastside and Madison Park until her retirement in 1950. The ferry operations ran nearly continuously for 18 hours each day. The construction of the first Lake Washington floating bridge in 1940, however, made ferry service unprofitable and eventually led to its cancellation. Subsequent years saw wool milling and warship building become the major industries.

The first woolen mill in the state of Washington was built in Kirkland in 1892. The mill was the primary supplier of wool products for the Alaska Gold Rush prospectors and for the U.S. military during World War I. By 1917, after the completion of the Lake Washington Ship Canal, the construction of ocean-going vessels had become a major business. By 1940, the thriving Lake Washington Shipyard had constructed more than 25 warships during World War II for the U.S. Navy, on what is now Carillon Point. 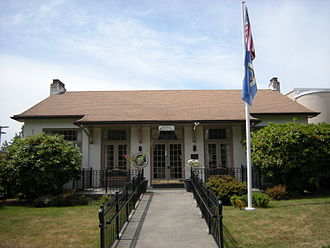 Since the incorporation of Kirkland in 1905, the city has grown to approximately 12 times its original geographic boundaries, nearly doubling in size during the 1940s and 1960s.

Kirkland consolidated with the neighboring town of Houghton on July 31, 1968, to form one city of 13,500. It annexed the neighborhood of Totem Lake in 1974, and the neighborhoods of South Juanita, North Rose Hill, and South Rose Hill in 1988, which were the largest annexations undertaken in Washington in nearly two decades. This added a further 16,119 people to Kirkland's population and was responsible for 76 percent of Kirkland's population increase between 1980 and 1990.

On November 3, 2009, responding to a county initiative to encourage cities to annex or incorporate many of the unincorporated areas within the county, as well as a state sales tax incentive intended to ease the process, three previously unincorporated districts north of the city—Finn Hill, Juanita, and Kingsgate—voted on whether to annex to Kirkland. The measure failed by seven votes to reach the 60% margin, which was required because the measure included accepting a share of the city's voter-approved debt. However, since the affirmative vote was over 50%, the city council could and did vote to accept the annexation, without the assumption of debt.

Kirkland is bordered to the west by Lake Washington, to the east by Redmond, to the south by Bellevue, and to the north by Kenmore, Woodinville, and Bothell.

Kirkland is accessible via Interstate 405, which connects it with other Eastside cities, including Bellevue, Renton, and Bothell. Seattle, which is west of Kirkland, as well as Redmond to the east, are both accessible through State Highway 520.

Kirkland had a gallery district downtown until recent years when all but three galleries closed or moved away. The Kirkland Performance Center hosts a number of performing arts events. The Kirkland Arts Center, located in the historic Peter Kirk Building on Market Street, provides classes, workshops and community-oriented gallery space.

Kirkland hosted the annual Kirkland Concours d'Elegance at Carillon Point from 2003 until 2011, showing vintage and classic automobiles (and wooden boats) from across the country. The Porsche Club of America now hosts an annual Porsche car show at the Carillon Point location every September.

Kirkland FC is an amateur soccer club in the Western Washington Premier League, which began play in 2018. They are referred to as the Goats.

Kirkland was the original home of the Seattle Seahawks; the NFL team's headquarters and training facility were located at the Lake Washington Shipyard (now Carillon Point) along Lake Washington for their first ten seasons (1976–85), then at nearby Northwest University through 2007.

The Kirkland Baseball Commission provides recreational baseball for players ages 13–18. It is affiliated with the national Pony Baseball organization.

During the summer, residents of neighboring cities flock to Kirkland to visit Kirkland's many waterfront parks on Lake Washington. Kirkland has neighborhood parks as well, contains a corner of Saint Edward State Park, and abuts the equestrian Bridle Trails State Park. The waterfront parks are linked by a paved trail, which is open until dusk. Juanita Beach Park is another major park in Kirkland, and is a tourist attraction. 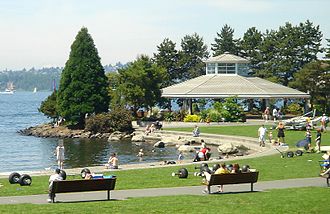 Kirkland is home to Lake Washington Technical College and Northwest University, a small Christian college. Additionally, Kirkland is bordered on the northwest by the campus of Bastyr University (which is technically in Kenmore).

In 2006, Kirkland was the first city in Washington to adopt a Complete Streets ordinance, whereby pedestrian and bicycle facilities are addressed as a part of all road construction and improvement planning projects. Kirkland passed an Active Transportation Plan in 2009 specifically targeting improvements to pedestrian, bicycle, and equestrian facilities.

As part of Sound Transit 3, Kirkland is slated to receive a short Link light rail line from Issaquah and Downtown Bellevue that will terminate at South Kirkland Park and Ride. It is scheduled to open in 2041. The Sound Transit 3 program also includes a bus rapid transit line on Interstate 405, with stops at NE 85th Street and the existing Totem Lake Freeway Station. The NE 85th Street station is projected to cost $235–300 million, making it one of the most expensive bus projects under consideration by Sound Transit, due to the need to completely rebuild the cloverleaf interchange. The city's existing transit center about a mile away and about 200 feet (61 m) lower in elevation could be connected with the first aerial tramway in the Seattle area. The station is planned to open in 2024 after three years of construction.

Kirkland is served by EvergreenHealth, a public healthcare system that operates a 318-bed hospital complex near Totem Lake. It was founded in 1967 and opened the first phase of Evergreen General Hospital in 1972.

The city was the first in the country to suffer a cluster of cases of Coronavirus disease 2019 during the COVID-19 pandemic, including the first six U.S. fatalities. Many of the confirmed cases originated from a Life Care Centers of America nursing home in Kirkland.