Waterfront condos are a unique lifestyle option in many parts of Greater Seattle.  Ballard and many other neighborhoods have some waterfront locations that lend themselves to a waterfront lifestyle that still allows the ease of living that condos provide.  Some condos are simply located on the shoreline of a lake, while others may have access to shared, owned, and community beaches, docks, and moorage, or maybe just a stream or creek.

While there are not always waterfront condos available for sale in Ballard, check back often as new listings will appear on our site daily.  If you can't find the waterfront condo you're looking for, just Contact Us and we'll do the searching for you.

Ballard is a neighborhood of contrasts: gleaming new condos, rough industrial businesses, popular bars and restaurants, and quiet classic bungalow-lined streets. A wave of immigrant Danes, Finns, Icelanders, Norwegians and Swedes gave Ballard an "old country" flavor that lives on today. Ballard was known early on as the world's top producer of wood shingles and for its fishing fleet, still a towering presence above the Salmon Bay and Ship Canal waterfront. Its housing density has been increasing in recent years, and its business districts are known for restaurants and bars.

Ballard is a neighborhood in the northwestern area of Seattle, Washington, United States. Formerly an independent city, the City of Seattle's official boundaries define it as bounded to the north by Crown Hill, (N.W. 85th Street), to the east by Greenwood, Phinney Ridge and Fremont (along 3rd Avenue N.W.), to the south by the Lake Washington Ship Canal, and to the west by Puget Sound's Shilshole Bay. Other neighborhood or district boundaries existed in the past; these are recognized by various Seattle City Departments, commercial or social organizations, and other Federal, State, and local government agencies. 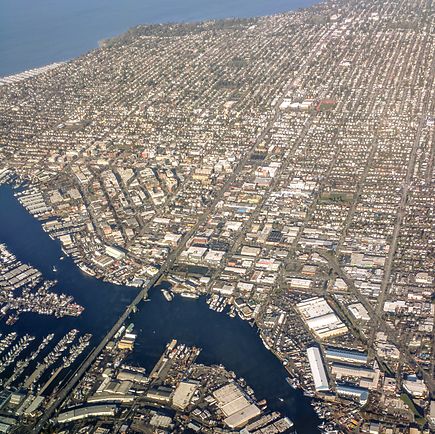 Ballard is located entirely within Seattle City Council District 6, which also includes the neighborhoods of Crown Hill, Green Lake and Phinney Ridge, as well as most of Fremont, North Beach/Blue Ridge, and Wallingford. Ballard is part of the Seattle Public Schools and the Washington State Legislature's 36th legislative district. At the federal level, Ballard is part of the United States House of Representatives's 7th congressional district.

The area now called Ballard was settled by the Dxʷdəwʔabš (Duwamish) Tribe after the last glacial period. There were plentiful salmon and clams in the region. The U.S. government code in the CDC (Centers for Disease Control which maintains a list of race and ethnicity for tracking) for this group is American Indian, Puget Sound Salish (Code A01-M43, H71). (There is no "Shilshole" tribe). The Burke Museum has artifacts from the group of Duwamish who lived at Shilshole. The references say that before non-Natives arrived, the group living around Shilshole may have been in decline due to a "great catastrophe". The remaining dozen or fewer families were evicted by non-Natives in the mid-19th century. One source suggests that the decline of the Shilshole dwelling Salish might have been due to raiding from Natives from farther north (Queen Charlotte's Island) and these raids also alarmed non-Native settlers. The last member of the Shilshole native group-HWelch’teed or "Salmon Bay Charlie"-was forcibly removed to allow construction of the Hiram Chittendon Locks.

The first European resident, homesteader Ira Wilcox Utter, moved to his claim in 1853. Utter hoped to see a rapid expansion of population but that did not happen, so he sold the land to Thomas Burke, a judge. Thirty-six years later, Judge Burke, together with John Leary and railroader Daniel H. Gilman, formed the West Coast Improvement Company to develop Burke's land holdings in the area as they anticipated the building of the Great Northern Railway along the Salmon Bay coastline on the way to Interbay and central Seattle. The partners also built a spur from Fremont's main line of the Seattle, Lake Shore and Eastern Railway. Today three miles (5 km) of this line, running along Salmon Bay from N.W. 40th Street to the BNSF Railway mainline at N.W. 67th, are operated as the Ballard Terminal Railroad.

During the late 19th century Captain William Rankin Ballard, owner of land adjoining Judge Burke's holdings, joined the partnership with Burke, Leary, and Gilman. Then, in 1887 the partnership was dissolved and the assets divided, but no one wanted the land in Salmon Bay so the partners flipped a coin. Capt. Ballard lost the coin-toss and ended up with the "undesirable" 160-acre (0.65 km2) tract.

The railroad to Seattle ended at Salmon Bay because the railroad company was unwilling to build a trestle to cross the bay. From the stop at "Ballard Junction," (as the terminus was called) passengers could walk across the wagon bridge and continue the journey to Seattle. In addition to gaining notoriety as the end of the railway line, fledgling Ballard benefited economically from the railway because the railroad provided a way to bring supplies into the area and also to export locally manufactured products. Ability to ship products spurred the growth of mills of many types. Ballard's first mill, built in 1888 by Mr. J Sinclair was a lumber mill; the second mill, finished the same year was a shingle mill. After the Great Seattle Fire in 1889 the mills provided opportunities for those who had lost jobs in the fire, which in turn spurred the growth of the settlement as families moved north to work in the mills. 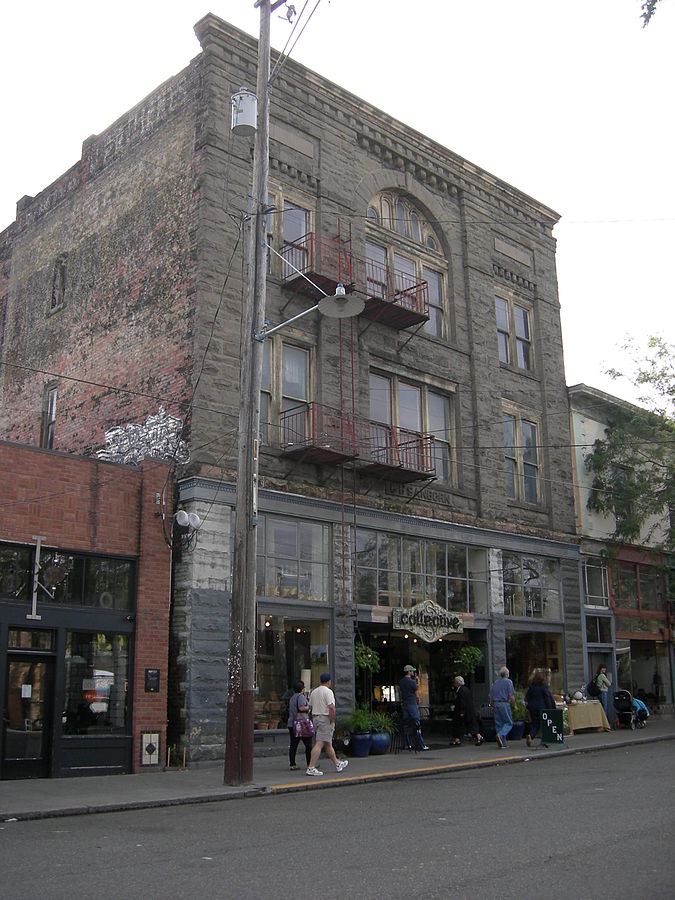 With the rapid population growth the residents realized that there might soon be a need for laws to keep order, a process that would require a formal government. In the late summer of 1889 the community discussed incorporating as a town, but eventually rejected the idea of incorporation. The issue pressed, however, so several months later, on November 4, 1889, the residents again voted on the question and this time they voted to incorporate. The first mayor of Ballard was Charles F. Treat. A municipal census, conducted shortly after the passing vote showed that the new town of Ballard had more than 1500 residents, allowing it to be the first "third class town" to be incorporated in the newly admitted state of Washington.

By 1900, Ballard's population had grown to 4,568 making it the seventh largest city in Washington, and the town was faced with many of the problems common to small towns. Saloons had been a problem since the beginning, and in 1904 the drinking and gambling became so bad that the mayor ordered the City of Ballard officially closed for the day in order to prevent gambling. The city also faced problems with loose livestock, so the Cow Ordinance of 1903 made allowing cows to graze south of present-day 65th St. a punishable offense. The city faced more serious problems, however, with two of the most difficult being the lack of both a proper water supply and a sewer system. The one weakness of the location on Salmon Bay was the lack of nearby freshwater springs, which meant that water came from local ground water wells. Lack of a proper sewage system contaminated the ground water, compounding the problem.

The town continued to grow, reaching 17,000 residents by 1907 and becoming the second largest city in King County. However Ballard, like many of the other small cities surrounding Seattle continued to be plagued by water problems. The rapid population growth had overwhelmed the city's ability to provide services, particularly a safe drinking water and sewer, and Ballard's city government had tried unsuccessfully to deal with the crises, so the citizens began considering asking Seattle to annex the town. In 1905 the question was voted on and the residents voted against annexation, hoping for a solution, but the problems refused to go away. In July 1906 the Supreme Court ruled that Seattle was not required to share water with surrounding communities. Ballard had been dependent on a water sharing agreement with Seattle, but the Supreme Court decision left them with inadequate water, forcing a second vote on the annexation question. By this time the residents realized the inability of local resources to cope with their situation and the majority of residents voted in favor of annexation. On May 29, 1907 at 3:45 pm the city of Ballard officially became part of Seattle. On that day Ballard citizens showed their mixed feelings about the handover by draping their city hall with black crepe and flying the flag at half mast.

At the end of the 20th century Ballard began to experience a real-estate boom. By early 2007, nearly 20 major apartment/retail projects were under construction or had just been completed within a five-block radius of downtown Ballard. The new developments will add as many as 2500 new households to the neighborhood. This growth in urban density is the result of the neighborhood plan created by former Seattle Mayor Norm Rice. Mayor Rice's plan aimed to reduce suburban sprawl by targeting certain Seattle areas, including Ballard, for high-density development. 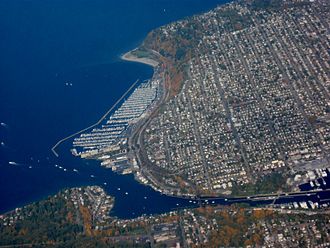 Transit and growth remain the two most contentious issues in the greater Seattle area. Sustainable Ballard, a group formed in 2004, is exploring many of these challenges on a community level. The group has adopted the slogan "A Blueprint for EveryTown USA." This fast growing community-wide effort is working on many projects, including "Undriving Ballard," a transportation campaign to reduce traffic in the neighborhood, and "Get Carbon Neutral," working toward Ballard becoming the first carbon neutral community in the nation, a goal inspired by Al Gore's An Inconvenient Truth. Gore lauded Ballard's efforts in an address at the NYU Law School on September 18, 2006.

Downtown Ballard is also home to the Majestic Bay Theater, which was the oldest operating movie theater on the West Coast prior to its closure in 1997. In 1998, it was renovated and transformed from a bargain single-screen theater to a well-appointed triplex. The Deep Sea Fisherman's Union is currently located in Ballard too. 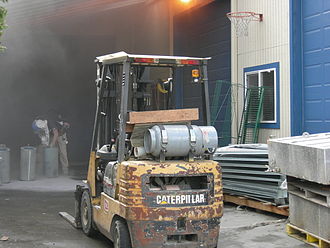 Formed in 1988 with encouragement from the Ballard Centennial Committee in celebration of the Washington state centennial in 1989, the organization's establishment coincided with the publication of Passport to Ballard, a collection of essays on the neighborhood's history from pre-European settlement up through the 1980s. In April 2007, the Ballard Historical Society unveiled its Historic Markers, which can be seen on buildings in the Ballard Avenue Historic District. 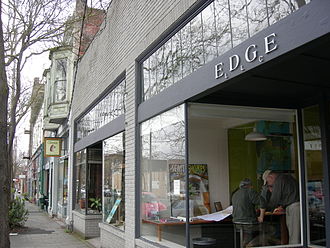 The organization also co-produced, along with the Nordic Heritage Museum and Swedish-Finn Historical Society, Voices of Ballard: Immigrant Stories from the Vanishing Generation (2001), a book collecting oral histories from long-time Ballard residents who have made the neighborhood home since before the 1960s. The Ballard Walking Tour, a self-guided tour created by the organization, highlights 20 different historic sites on and around Ballard Avenue. The most recent illustrated Tour Brochure was released in February 2009.

Every three years the Ballard Historical Society organizes the Ballard Classic Homes Tour and features a different set of vintage homes in Ballard during each parade of houses.

The public schools in the neighborhood are part of the citywide Seattle Public Schools district. Ballard High School, located in the neighborhood, is the oldest continuously-operating high school in the city. The original building was demolished in the late 1990s. The new school building is now one of the largest in the district and houses a biotechnology magnet program that attracts students from all over Seattle. The high school has been supported by Amgen, Zymogenetics, G. M. Nameplate, the Youth Maritime Training Association, North Seattle Community College, Seattle City Light, and Swedish Hospital. 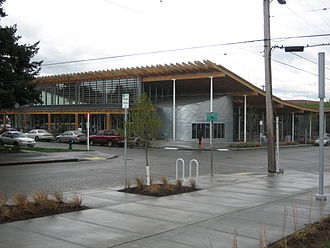 There are several elementary schools and one alternative school located in the neighborhood. The closest middle school is Whitman Middle School, which is located north of Ballard in the Crown Hill neighborhood.

The Seattle Metaphysical Library, originally opened in the Pike Place Market in 1961, is now on Market Street in Ballard, and is open to the public and lends books to members.

The following Ballard buildings, areas and landmarks are listed on the National Register of Historic Places: