The Broadview neighborhood is located in North Seattle. Condos for sale in Broadview include foreclosures (bank-owned condos), short sales, and traditional resale and new construction condos.

Broadview is part of King County and has a population of 15,069. Broadview is the #57 of 88 Best Neighborhoods to Live in Seattle and the #48 of 88 Best Neighborhoods to Raise a Family in Seattle. For Broadview Real Estate, the Median Home Value is $694,133, the Median Rent is $1,695, and the rate of homeowners is 65%. For Broadview Employment, the Median household income is $85,064 (54% higher than the US average), the Income per capita is $47,099 (58% higher than the US average), and the Unemployment rate is 2%. And the top three means of transportation to work are drive, public transit, and carpool.

Education options for the students in Broadview are available on the east side of the neighborhood. There's a highly-rated public school named Ingraham High School (ingrahamhs.seattleschools.org) at 1819 N 135th St. It has 1,488 students in grades 9-12 with a ratio of 21 students to 1 teacher. 67% of students in Ingraham High School are proficient in Math, and 88% are proficient in Reading. Another public school serving Broadview is Viewlands Elementary School (viewlandses.seattleschools.org) at 10525 3rd Ave NW. It is the #542 of 1,168 Best Public Elementary Schools in Washington and has 383 students in grades PK-5 with a ratio of 14 students to 1 teacher.

In the west of Bitter Lake Playfield, you will find Broadview Thomson K-8 at 13052 Greenwood Ave N. Broadview Thomson K-8 (broadviewk8.seattleschools.org) is the #213 of 514 Best Public Middle Schools in Washington, and it has 624 students with a ratio of 15 students to 1 teacher. And Preschools are serving Broadview are Language Garden Academy (languagegardenacademy.com) at 401 N 141st St and Washington International School (washingtoninternationalschool.com) at 1201 N 145th St in the east of Aurora Ave N.

If you're looking for a place to chill and listen to the waves, visit Carkeek Park. It is at 950 NW Carkeek Park Rd in the southern Broadview neighborhood. Carkeek Park is 220 acres of green space that offers picnic areas, a play area for kids, hiking trails, and a beach with breathtaking views of Puget Sound and the Olympic Mountains. Another park that offers hiking trails is Llandover Woods Greenspace. It is at 14499 3rd Ave NW in northern Broadview. Llandover Woods Greenspace is perfect for a walk, jog, or hike. For garden lovers, you may want to learn more about the various types of plants and flowers of the Dunn Gardens. It is at 13533 Northshire Rd NW in the west of 3rd Ave NW.

To celebrate a special day with family, bring your loved ones to Saltoro. It is at 14051 Greenwood Ave N in the west of Chevron Gas Station (northern Broadview). Saltoro (saltoroseattle.com) serves steaks, pasta, seafood, pizzas, salad, craft cocktails, beer, and wine. Another popular restaurant that serves fantastic food is Geo's Cuban Bar & Grill. It is at 10515 Greenwood Ave N in the east of Viewlands Elementary School. Geo's Cuban Bar & Grill (geosbarandgrill.com) serves the famous Cubano sandwich, Creole-inspired dishes, Coconut Flan Pie, and more. To enjoy the night by having drinks and karaoke with friends, check out A1 Hop Shop 144th at 14401 Greenwood Ave N. A1 Hop Shop 144th (a1hopshop.com) offers beer & wine selection and live music. See all condo listings in Broadview, Seattle on the link below.

Broadview runs along the Northwest border of Seattle on Puget Sound's shoreline. Waterfront homes, mostly on high-bank bluffs, dot the shoreline of Broadview's priciest enclaves, with a number of multi-acre, multi-million dollar homes on the Sound. Inland, Broadview has a fair number of less-expensive homes in similarly-quiet locations. Serviced by the retail establishments on Greenwood Ave, Broadview feels like an escape from the city, especially in its furthest-north coastal local, Llandover-by-the-Sound.

Broadview is bounded on the west by Puget Sound; on the north by the Seattle city limits at N.W. 145th Street, beyond which is the Highlands community in the city of Shoreline; on the east by Greenwood Avenue N., beyond which lies the neighborhood of Bitter Lake; and on the south by Carkeek Park, beyond which, from west to east, are the neighborhoods of Blue Ridge, Crown Hill, and Greenwood.

The name "Broadview" was given to the neighborhood because of its panoramic views of the Puget Sound and Olympic Mountains, which can be viewed to the west from its steep, westerly hillsides.

Farmers began to settle in Broadview and neighboring Bitter Lake in June 1889, after the Great Seattle Fire. These farmers had to float their goods into Seattle via the Puget Sound, because there were no roads at the time. Eventually, logging began in the area.

View of the Olympic Mountains and Puget sound from Seattle's Broadview neighborhood. 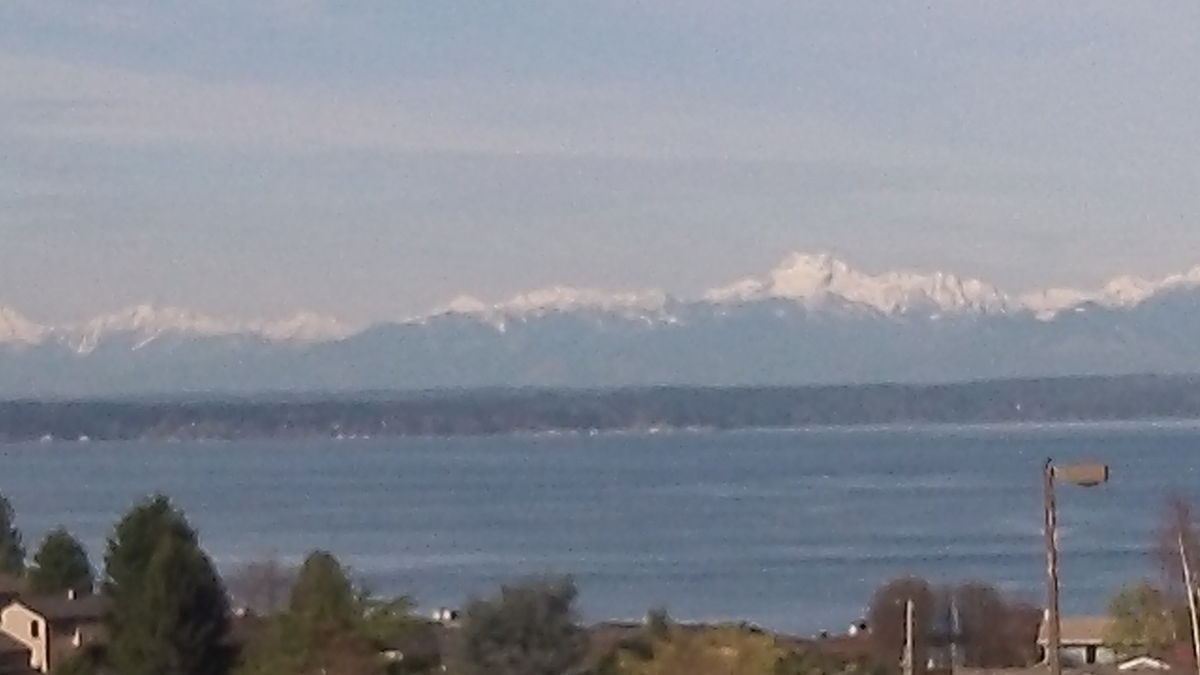