Maple Leaf is one of the highest elevations in the city of Seattle, and homes in the neighborhood often benefit with views of downtown Seattle, lakes, and mountains in the distance. Just northeast of Green Lake on the East side of I-5, this mostly-residential neighborhood has great access to parks and open space, as well as many nearby neighborhoods with more retail and commercial space. Roosevelt Ave and 5th Ave are lined with a handful of restaurants and shops frequented by local Maple Leaf residents. Maple leaf is appropriately named for its many tree lined streets.

The area that is now the Maple Leaf neighborhood appeared on maps in 1894 as a plat by real estate promoters and was called the Maple Leaf Addition to the Green Lake Tract. The name may have come from the Maple Saw Mill that operated to the east on Lake Washington or from some maple trees that once grew in the area. There is also an apocryphal story that Maple Leaf was so far north of downtown Seattle that it got its name for being near Canada.

It wasn't until after World War II that the entirety of Maple Leaf neighborhood was within the Seattle city limits. Prior to 1954 the city line was located at 85th Street, but after a series of annexations took place the city limits moved to its current location of 145th Street.

In 1986 Maple Leaf was given the title of national "Neighborhood of the Year" by Neighborhoods USA. Seattle Mayor Charles Royer nominated Maple Leaf for the award. 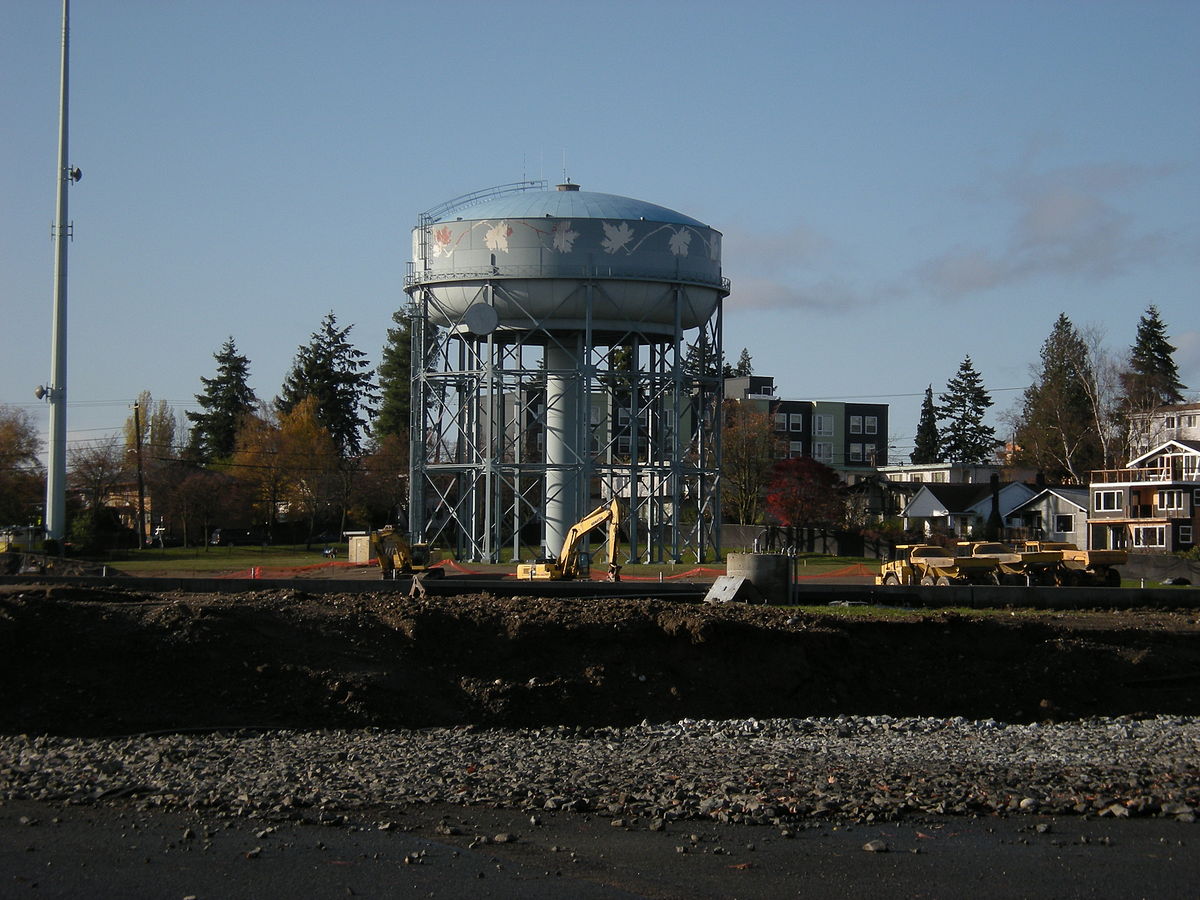 Although Seattle neighborhood boundaries are unofficial, Maple Leaf lies between Interstate 5 in the west and State Route 522 (also known as Lake City Way) in the east. The neighborhood goes as far north as Northgate Way and as far south as NE 75th Street.

The highest point in Maple Leaf, located on 92nd Street and Roosevelt Way, is 466 feet above sea level, making it the third highest point of elevation in Seattle.

Distinctive features of the neighborhood include the water tower and reservoir located at 85th and Roosevelt, plus historic Waldo Hospital at 85th NE and NE 15th. The water tower is painted with a distinctive coupling of maple leaves viewable from Interstate 5.

The Maple Leaf reservoir was completed in 1910 with the purpose of creating a reservoir for residential and commercial water use. In 2009 the Seattle city government began plans to move the reservoir underground. This was part of a citywide plan to replace all open reservoirs with underground structures in order to improve the quality and security of the water supply and provide new public open spaces on reservoir lids throughout Seattle. In 2013 the 16-acre park was completed.

Maple Leaf Playground, near the water tower and the covered Maple Leaf Reservoir that serve as the main recreation area in the neighborhood

There are two public elementary schools in Maple Leaf which are part of the citywide Seattle Public Schools district.

Along with the two public elementary schools Maple Leaf is home to a handful of private schools.

Although it would be considered outside of the current Maple Leaf neighborhoods boundaries, the Maple Leaf School opened in 1896 near Lake Washington.

The Northgate Library, which is a branch of the Seattle Public Library system, is located on 10500 block of 5th Avenue, across from Northgate Mall. The library and the adjacent community center and park opened in July 2006.