View Ridge is a neighborhood in Northeast Seattle with Lake Washington views from the majority of its home sites. Situated between Wedgwood and Magnusson Park, View Ridge is increasingly becoming a destination for modern architecture afficionados. Many mid-century ramblers are becoming two-story remodels with outstanding views and modern styling to complement the open designs. Nearby parks, great schools, and quiet streets continue to make View Ridge a sought-after neighborhood. 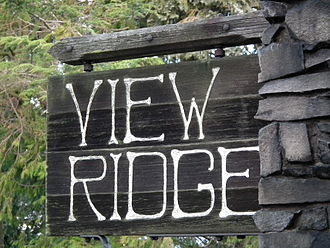 View Ridge is home to a considerable Jewish community, with a Hasidic synagogue, Congregation Shaarei Tefillah Lubavitch, located at the corner of NE 65th St. and 43rd Ave. NE. There are several churches, too: Lutheran, Methodist, Presbyterian, and Catholic. In addition to the public elementary and middle school, there are many private schools nearby. 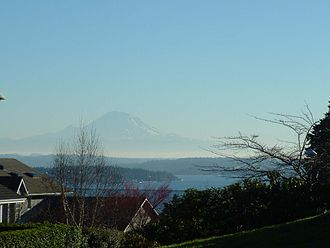 View Ridge was first settled in 1936 by Ralph Jones and Al Balch; it is one of the newest neighborhoods in Seattle. Upon buying 10 acres (40,000 m2) of forest land in what is now the neighborhood, Jones and Balch cleared trees to create views of Lake Washington and the Cascades. They then sold lots on their land for $450 to $950 and created publicity for their property sales. Their initial success in selling land in View Ridge enabled them to expand their efforts, and they bought more land to reach the current boundaries of View Ridge. The neighborhood was annexed into Seattle in 1942. View Ridge Elementary School was founded with portable classrooms in 1944 and was built in 1948. In the late 1980s, View Ridge became the site of a series of arsons. The first fires occurred in March 1987, when four houses were set on fire in one night, resulting in the death of an elderly couple. In 1989, several more cases of arson were committed in the neighborhood; the arsonists responsible ultimately set forty fires.