The Wallingford neighborhood is located in North Seattle.  Condos for sale in Wallingford include foreclosures (bank-owned condos), short sales, and traditional resale and new construction condos.

Wallingford is a popular North Seattle neighborhood with a vibrant small-town business district complementing a picturesque residential zone. 45th St is popular with residents across Seattle, with its eclectic mix of restaurants, bars, shops, and other businesses. To the South, quieter residential streets are tree-lined and graced by beatifully restored Craftsman homes. To the North is Green Lake, numerous parks, and the pocket retail district of Tangletown. There are few condos in Wallingford, but the neighborhood is a favorite of those seeking a walkable location with its accessibility to multiple shopping locations.

Wallingford is a neighborhood in north central Seattle, lying on a hill above the north shore of Lake Union about four miles from the downtown core. The neighborhood developed quickly during the early 20th century after the establishment of the University of Washington to the east. With trolley tracks laid through the neighborhood as early as 1907, Wallingford is a classic streetcar suburb, typified by its many 1920s era box houses and bungalows. Commercial development is primarily concentrated along 45th Street where a number of iconic structures stand including the neon "WALLINGFORD" sign, the Wallingford Center, and the original Dick's Drive-In. With its central location, numerous public amenities, including the world-renowned Gas Works Park, and views of both the Olympic and Cascade mountains, Wallingford has long been home to many middle and upper-class families. While Wallingford is mostly residential in nature, the neighborhood's southern edge, along Lake Union, has historically been an industrial and commercial business strip. In recent years, numerous office buildings have been developed as an extension of the burgeoning business center in neighboring Fremont. In 2014 Brooks Sports moved its headquarters from Bothell to a new six-story office building at the southwestern edge of Wallingford. 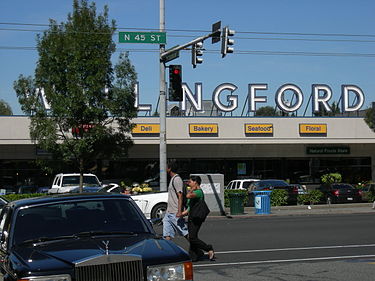 Like all Seattle neighborhoods, there are no official boundaries for Wallingford. Geographically speaking, the neighborhood is primarily defined by the sloping ridge that runs north from the edge of Lake Union to 45th Street, with the ridge line approximately following Wallingford Avenue. Generally the boundaries are considered as Aurora Avenue to the west, Interstate 5 to the east, Lake Union to the south, and 50th Street to the north; however the western and northern boundaries are often debated. The Seattle City Clerk defines the area south of 45th and west of Stone Way as part of Fremont. A number of businesses in this southwestern section, particularly those south of 40th street, use the Fremont moniker in their names, such as the Fremont Collective at Stone Way and 35th Street and the Fremont Brewing Company at 34th Street and Woodland Park Avenue. The 1998 Neighborhood Plan defined the northern edge of the neighborhood as 60th Street, however the area north of 50th street is often associated with Green Lake and sometimes considered part of the distinct neighborhood of Tangletown.

The cultural center of the neighborhood is frequently considered the intersection of 45th street and Wallingford Avenue. The QFC grocery store on the north side of this intersection has a large, neon "WALLINGFORD" sign made up in part from letters in the old "FOOD GIANT" sign which adorned QFC's predecessor for decades. On the southeastern corner of this intersection is the Wallingford Center, a 53,000 square foot elementary school built in 1904 that has been renovated and converted into two floors of shopping and dining establishments with 24 studio apartments above.

John Noble Wallingford Jr. (1833–1913) was a major local landowner and real estate speculator; at one time his holdings included most of what is now Wallingford and extended north as far as Green Lake. He traveled often up and down the West Coast of the United States and lived for a time in Alaska.

Wallingford's business district extends along N 45th Street from Stone Way N in the west to Sunnyside Avenue N in the east and features the QFC grocery store, many small shops, three banks, three pharmacies, a few taverns and bars, the Wallingford Center (the former Interlake Elementary School, now turned into shops and apartments), and numerous restaurants (including the original Dick's Drive-In, founded 1954).

Public spaces include Gas Works Park, Meridian Playground, and Wallingford playfield. Gas Works Park on Lake Union borders the Burke-Gilman Trail and provides a panoramic extension into Lake Union, with a playground in planning as part of the 2009 parks levy. The nearby North Transfer Station, a waste sorting center, was rebuilt in 2016 and includes a small park and playground. 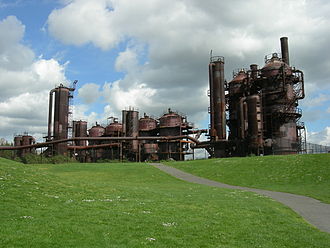 Meridian Playground features a former Roman Catholic home for wayward girls called the Good Shepherd Center, now a shared community space run by Historic Seattle. Major tenants include Seattle Tilth, Meridian School, the Wallingford Senior Center, and the Chapel performance space which features the Wayward Music Series. Wallingford playfield borders recently renovated Hamilton International Middle School and features views and a wading pool open in summer months. To the north lies Lower Woodland Park, which features athletic fields, a skate park, tennis courts, and connections to the Woodland Park Zoo and Green Lake. The University of Wallingford began in 1984, to provide religious training and Social Gospel Care to the neighborhood. It is located in the Seattle First Church of the Nazarene, behind Dick's on 45th.

Wallingford is home to several community organizations. The Wallingford Neighborhood Office, located behind Tully's (now closed—new occupant TBD on the northeast corner of Meridian Avenue N and N 45th street) helps organize local events. The Wallingford Community Council meets the first Wednesday every month in the Good Shepherd Center and engages the community with government organizations. Sustainable Wallingford is a residents group dedicated to sustainable living. Seattle Tilth runs the public gardens and plant sales at the Good Shepherd Center. Solid Ground (formerly The Fremont Public Association) is colocated with the Wallingford Branch of the Seattle Public Library and runs a food bank and family support services. The Wallingford Boys and Girls club provides a safe, social space for kids and teens along 45th, while the Wallingford Senior Center provides a safe social space for older folks. 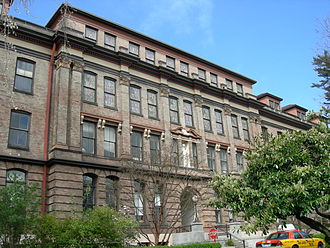 Several major motion pictures have featured scenes filmed in Wallingford, including Cinderella Liberty, Scorchy, Harry and the Hendersons, World's Greatest Dad, Singles, Say Anything..., American Heart, Class of 1999, and 10 Things I Hate About You.