Rainier Valley is a neighborhood in South Seattle generally consisting of the inland areas in close proximity to Rainier Ave S. Portions of other distinct neighborhoods are often grouped in with Rainier Valley, including Genesee, Columbia City, Hillman City, Brighton, and Rainier Beach. With very affordable housing prices and a mix of traditional homes and new construction development, it is an attractive price point for many first time home buyers.

The Rainier Valley is a district in south east Seattle. It is located east of Beacon Hill; west of Mount Baker, Seward Park, and Leschi; south of the Central District and First Hill; and north of Rainier Beach. It is part of Seattle's South End.

There are several identifiable neighborhoods within Rainier Valley, including (from north to south) "Garlic Gulch" (or the north Valley, from Dearborn to the junction of MLK and Rainier), "Genesee" (from the junction to Alaska), Columbia City (Alaska to Dawson), Hillman City (Dawson to Graham), Brighton (Graham to Kenyon), Dunlap (Kenyon to Cloverdale), and Rainier Beach, which is the only neighborhood in the city where African-Americans make up the majority, at 55%.

The Valley is centered on Rainier Avenue South and Martin Luther King Jr. Way South, its main (northwest- and southeast-bound) thoroughfares. Both Rainier Avenue South and the Valley were named after Mount Rainier, towards which "[t]hrough a fortunate geographic circumstance" the Valley (and hence the street) is oriented. Rainier Avenue South goes through several distinct phases as it winds southeasterly toward Renton, with the north portion being mainly commercial, the central (Columbia City) portion a densely populated historic district, and the southern portion a less dense collection of businesses, apartments, and houses.

Martin Luther King Jr. Way South (usually shortened to "MLK Way"), formerly known as Empire Way (renamed in the 1980s), now carries Seattle's light rail line for the length of the valley until it veers west to serve the North Beacon Hill neighborhood, SoDo industrial area, and downtown Seattle. Light rail and its attendant improvements (most notably underground wiring) have breathed new life into Martin Luther King Jr. Way South, considered[by whom?] for decades one of the most blighted thoroughfares in Seattle. The construction of light rail brought new residential and commercial development to stations at Columbia City and Othello. 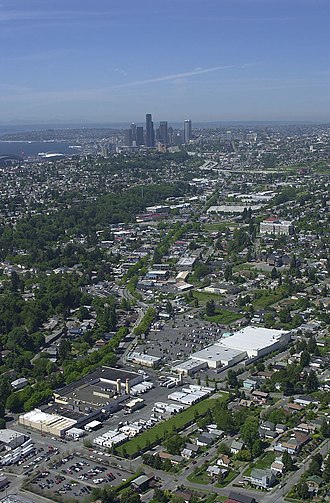 Aerial view of Rainier Valley, with downtown Seattle in the background, taken in 2001

Rainier Valley is known for a roughly 1/4 split between whites, blacks, Asians, and Hispanics (though the statistics noted above are a little different) and for the relative harmony between these groups. Italians were prominent in the early 1900s and some could argue set the harmonious tone of the Valley that survives to this day. However, most of the Italians, with some notable exceptions, left the Valley in the 1960s. However, while Italians were prominent in the north Valley in the early 20th century, the Central Valley (Columbia City and thereabouts) was mostly settled by the same midwestern folk and northern-European immigrants (primarily British and Scandinavian) who settled most of the rest of Seattle. Notwithstanding these generalizations, there have always been Asians in the Valley, with Japanese farmers living in the Valley (attracted by the same thing the Italians were, the rich Valley bottomland) since its inception - there were two historic Japanese-American nurseries in the Valley - Mizukis and Holly Park, with Holly Park Nursery a vibrant presence to this day. It is tough to describe the Valley, but it can be said that the construction of the Holly Park and Rainier Vista housing projects World War II to house war workers were seminal events. Following the war and until the Boeing crash of 1971, the Valley boomed with middle-class residential construction (many post-war split-levels dot the valley) and with all of this construction, the Valley continued its historic diversity. Interracial couples in the 1950s found the Valley more accepting than the northern half of the city because of the relative lack of "deed covenants" found in the South End (covenants ruled unconstitutional by the United States Supreme Court in the 1960s).

The Civil Rights Act precipitated a "white flight" from the valley despite its historic diversity. The general exodus of whites from the valley, Beacon Hill, and Seward Park, which began in the mid-60s, was primarily over by the mid-80s, when some historic "children of the Valley" began to return to it, as well as other non-immigrant adventurous sorts attracted to its affordable housing, its excellent access to parks, downtown, and the entire metropolitan area. With the end of the Vietnam War in 1975, a wave of Vietnamese immigrants opened businesses along abandoned areas of Martin Luther King Jr. Way South, extending four miles south of the official Little Saigon neighborhood on South Jackson Street. Perhaps more numerous than this Vietnamese wave was that of Filipinos throughout the Valley, though their businesses are fewer. St. Edward Roman Catholic Church is the cultural heart of the Filipino community in the Valley, and St. Edward School remains a beacon in the Central Valley for those Valley parents wishing a Christian education for their children, of whom Filipinos are currently the majority. 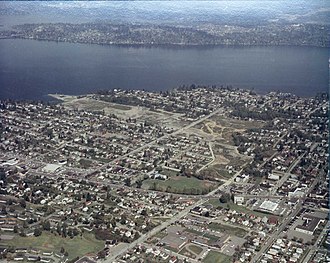 Beginning in the 1960s, Rainier Valley began to be viewed as "unsafe," with this view peaking in the 1980s. As noted, the Valley is diverse and did include two housing projects, Rainier Vista and Holly Park, that have been completely remodeled. Holly Park was renamed (New Holly) because the associations became so grim. However, the dangerous aspect of the Valley has always been overstated by those who do not live there, and while it may be verifiable that the Valley is the home of such organized gangs as the 74 Hoover Crips which in 2006 was noted to have had a rivalry against the Central District Bloods, Columbia City has an active nightlife, and security-requirements can be as low or lower than other parts of Seattle. Of the 28 homicides in Seattle in 2008, six occurred in Rainier Valley. This may be statistically disproportional (21% of homicides vs. 8% of the population), but it by no means suggests that the Valley, with all its interesting restaurants and shops, should be avoided, since Seattle is such a safe city to begin with. In fact, in 2016 the national edition of the Wall Street Journal ran a large article about rising Rainier Valley rents forcing some low-income tenants to seek shelter elsewhere.

The Valley neighborhoods lying along Rainier Avenue South rival any other part of Seattle for age, since they are near the historic streetcar (removed in 1937) that in 1892 connected downtown Seattle to Columbia City and then later to Renton, known as the "Rainier Valley and Renton Railroad." The railroad, the reorientation of the Duwamish River and the lowering of Lake Washington, which caused the lake to drain west through Lake Union and the Ship Canal rather than south, made the valley dry enough to allow building, where it boomed along with the rest of Seattle on and after the Alaskan Gold rush right up to the Depression of the 1930s. Because Seattle was a hamlet before the 1889 Alaskan Gold Rush, there is little to distinguish the historic parts of Rainier Valley from other historic neighborhoods in Seattle. Away from Rainier Avenue South, a fair amount of the development is postwar, when the Valley was filled out as part of the "Boeing boom," but historic pre-World War II housing can be found in every part of the Valley, where these often imposing homes once commanded large spreads that were later subdivided and sold off. One such estate was owned from 1902 to 1916 by a certain up-and-coming dry-goods purveyor by the name of J. Walter Nordstrom, who brought up his young family of three children there, as documented by the Rainier Valley Historical Society in 2017 (the estate was at the 3700 block of South Juneau Street). Unlike most of Seattle, then, the Valley has an interesting mix of pre- and post-war houses cheek-to-jowl (in Seattle residential style), with only the neighborhood immediately surrounding Columbia City almost exclusively pre-World War II. 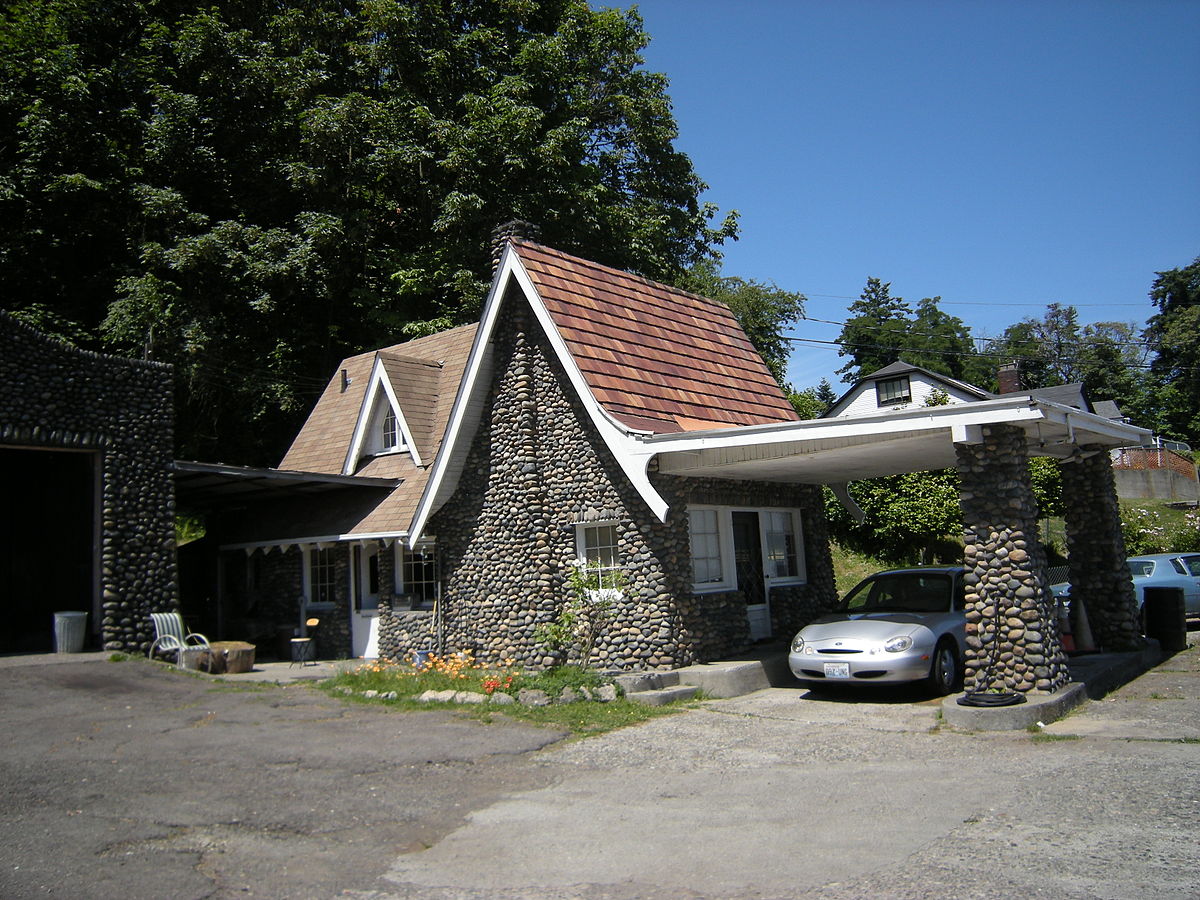 The former Collier's Service Station, 9701 Rainier Avenue S. at the corner of S. Pilgrim Street, Seattle, Washington. The station, closed since 1963 but still owned (as of 2009) by the Collier family, originally sold the Clipper brand of gasoline. Bricklayer Earl Collier was responsible for the unusual stone decoration. July 2009