Seattle waterfront condos are a unique lifestyle option in the Puget Sound region.  Many neighborhoods have waterfront locations that allow the ease of condo living along with the enjoyment of the outdoors on the waterfront.  Some condos are simply located on a lake, river, or sound shoreline, while other may have access to shared, owned, and community beaches, docks, and moorage. 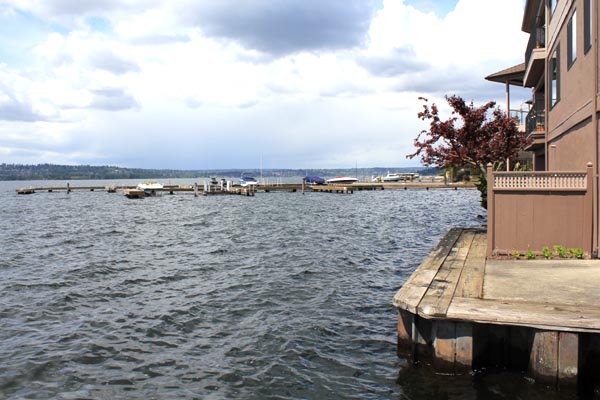 While there are condos on many smaller lakes around the Seattle region, the largest concentrations of waterfront condos are on Puget Sound and Lake Washington.

Puget Sound waterfront condos are located on Elliott Bay near downtown Seattle and stretch north and south into neighboring cities.  The beaches in Alki and Beach Drive in West Seattle give some of the best ocean-style waterfront condo locations.  Further to the south, Des Moines, Tacoma and Gig Harbor have some picturesque waterfront condos.

Lake Sammamish is ringed by Bellevue, Redmond, Sammamish, and Issaquah.  The only true waterfront condos on Lake Sammamish are in Redmond on the Northwest shore of the lake.  There are some condominiumized residences that live more like single family homes in Bellevue as well as on the Eastern shore in Sammamish.

Lake Union is located close to the heart of Seattle.  Some of its houseboats and floating homes are in condominiumized real estate structures, as well as co-op arrangements.  These waterfront homes are a condo alternative for some.

While there are not always waterfront condos available for sale in every neighborhood of Seattle, check back often as new listings will appear on our site daily.  If you can't find the waterfront condo you're looking for, just Contact Us and we'll do the searching for you.

The database information herein is provided from and copyrighted by the Northwest Multiple Listing Service (NWMLS). NWMLS data may not be reproduced or redistributed and is only for people viewing this site. All information provided is deemed reliable but is not guaranteed and should be independently verified. All properties are subject to prior sale or withdrawal. All rights are reserved by copyright.
Like or Share
Loading likes...