Waterfront condos are a unique lifestyle option in many parts of Greater Seattle.  Alki and many other neighborhoods have some waterfront locations that lend themselves to a waterfront lifestyle that still allows the ease of living that condos provide.  Some condos are simply located on the shoreline, while other may have access to shared, owned, and community beaches, docks, and moorage.

While there are not always waterfront condos available for sale in Alki, check back often as new listings will appear on our site daily.  If you can't find the waterfront condo you're looking for, just Contact Us and we'll do the searching for you.

Alki wraps itself around the entire northern tip of West Seattle. Alki and Alki Beach cover a full three miles of walks, beaches, volleyball, boat rentals and many restaurants. Alki is a very popular destination in warm weather, as it's one of the few sandy beaches with saltwater access in Seattle. Everyone has a view to go along with the vacation lifestyle along the shoreline. Take the passenger ferry to downtown, enjoy the drive along the beach, or just stay home and enjoy the view.

Alki Point /ˈælkaɪ/ is a point jutting into Puget Sound, the westernmost landform in the West Seattle district of Seattle, Washington. Alki is the peninsular neighborhood on Alki Point. Alki was the original white settlement in what was to become the city of Seattle. It was part of the city of West Seattle from 1902 until that city's annexation by Seattle in 1907.

The Alki neighborhood extends along the shore from the point, both southeast and northeast. To the northeast it continues past Alki Beach roughly to Duwamish Head, the northernmost point of West Seattle.

The Duwamish called it "Prairie Point" (Lushootseed: sbaqWábaqs). The name refers to prairies near the point that were maintained through seasonal burning by indigenous cultivators. It was a place of native occupation as well as colonial reconnaissance well before 1851. Other names for the point include Battery Point, Me-Kwah-Mooks Point, and Roberts Point. 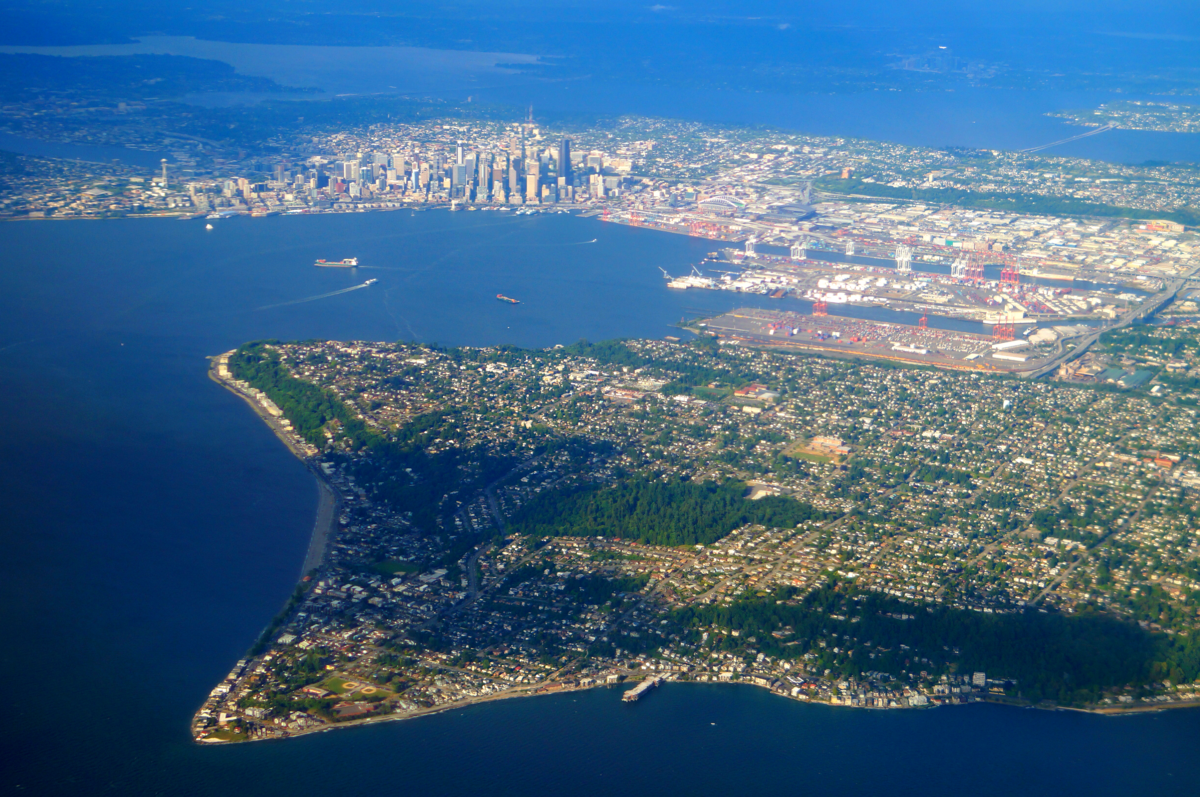 Aerial view of Alki Point in Seattle. Elliott Bay and Downtown Seattle can be seen in the background.

The Denny Party landed at Alki Point November 13, 1851, and platted a settlement of six blocks of eight lots. The original name of the settlement was "New York Alki," "Alki" being a word in Chinook Jargon (Wawa) meaning "eventually" or "by and by." The name "New York" may have been chosen because it was the state of origin of several of the settlers. However, the next April, Arthur A. Denny abandoned the site at Alki for a better-situated site on the east shore of Elliott Bay, just north of the plat of David Swinson "Doc" Maynard. This site is now known as Pioneer Square.

Charles C. Terry, who owned the land, and some others held on at Alki for a while, but most eventually joined the others in Pioneer Square. Terry gave his claim to Maynard in 1857 in exchange for his Pioneer Square holdings; Maynard farmed the land for 11 years and sold it to Hans Martin Hanson and Knud Olson in 1868, Hanson taking possession of the point itself. 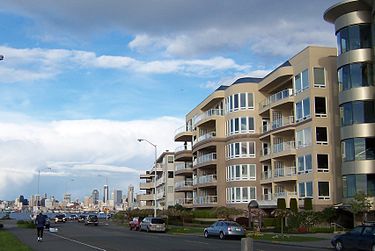 Alki marina waterfront with downtown Seattle in the background

The Alki Point Lighthouse dates from 1913, replacing the United States Lighthouse Service's post light from 1887 and Hanson's lantern-on-a-post from the mid-1870s.

From 1925 to 1936, a ferry route across Puget Sound connected Alki Point with Manchester, Washington on the Kitsap Peninsula.

Well into the 20th century, Alki was reachable from most of Seattle only by boat. Alki today is reminiscent of a Pacific Northwest beach town, with a mix of mid-century bungalows, medium-rise waterfront apartment houses, waterfront businesses, a thin beach, and a road with a bike/foot trail running several miles along the water. This section of West Seattle is bounded on the northwest by Elliott Bay; on the southwest by Puget Sound; and on the east by the West Seattle hill. Its main thoroughfares are Alki Avenue S.W. (northeast- and southwest-bound); Beach Drive S.W. (northwest- and southeast-bound); and S.W. Admiral Way (east- and westbound). 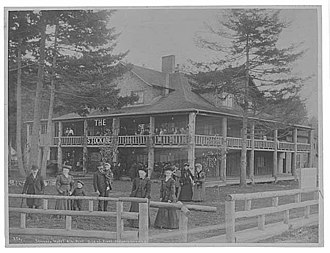 Theodore Peiser's photo of the Stockade Hotel on November 13, 1905

There have been summer concerts at Alki Beach since the early 1900s; the original streetcars to West Seattle were established in order to bring people to these events. Today, the beach plays host to the Seattle Music Fest every August, a three-day music festival that plays host to emerging Northwest artists and selected national and international headliners.

Denny Monument is located at Alki Beach. It has the names of the first Seattle colony listed on it. The third side of the monument gives the names of the adults composing the first Seattle Colony: "Arthur A. Denny and his Wife. John N. Low and Wife. Carson D. Boren and Wife. David D. Denny. Charles C. Terry", and on the base, "New York Alki (By and By)", the name first given the settlement. The fourth side says "Erected by the Washington University State Historical Society, 13 November 1905", and on the base, "Presented by Lenora Denny." 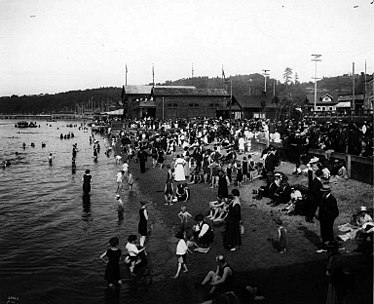 Alki Beach is the principal tourist attraction at Alki Point. It features sand, saltwater, bungalows, and unique local restaurants. It is generally not a popular swimming beach, owing to the cold waters of Puget Sound. It offers stunning views of the Olympic Mountains and downtown Seattle from all points. Alki Beach is also a place to "people watch" or get a tan, and it provides a casual environment for people to gather and hang out. There is access for wheelchair users and roller-skaters. In the summer months, Alki Beach becomes crowded, especially on weekends. Alki Beach is also famed for its biking and walking trail, which provides a picturesque view of nearby Blake Island. Tourist attractions include the miniature of the Statue of Liberty, the iconic Alki Point Lighthouse and the Birthplace of Seattle monument which also includes a people tribute to the Indigenous Duwamish people without whom the first settlers would not have thrived. The main commercial strip in West Seattle, uphill from Alki Beach, California Ave SW provides five-and-dime shops and diners that recall earlier decades.

Alki Point Lighthouse is a historic landmark built in 1913 that still functions today. Though the property is not open to the public, the tower is available for touring on summer weekend afternoons when the lens can be viewed. Despite its normal inaccessibility, it provides the tourist with the feeling of an authentic beach town and contributes to the overall picturesque.

A scale replica of the Statue of Liberty at Alki Beach was donated by Reginald H. Parsons and the Seattle Area Council of The Boy Scouts of America in 1952. The statue may allude to "New York-Alki", the name of the 1851 settlement at Alki (see above). Many tourists mourned the September 11, 2001 terrorist attacks on the World Trade Center at the site.

Alki Beach has been a venue for summer concerts every August since the early 20th century. The local music scene draws tourists and locals alike. Live music can also be found at Kenyon Hall which features a Wurlitzer theater organ. The Historic Admiral Theater also presents live performances on occasion.

Bungalows are nestled between condominiums along Harbor Avenue. These historic homes, such as the Hanson-Olsen Home, originally built in the 1860s, provide a glimpse into the Arts and Crafts movement which flourished in the cities of the American West in the late nineteenth and early twentieth century. Many of these bungalows are today in poor condition, and residents have been increasingly forced to renovate or move them to another destination, or risk demolition. 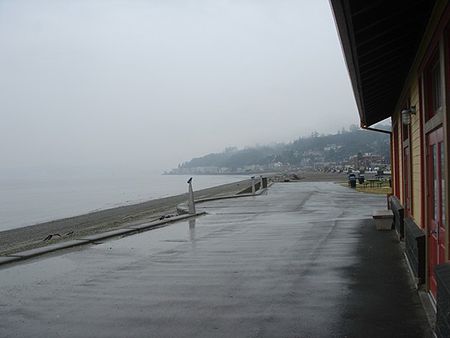 Alki Beach on a rainy day

Hamilton Viewpoint Park, founded in 1954, provides a picturesque view of Elliott Bay. This park is located above Alki Beach on California Avenue SW. There are benches and lawn suitable for picnics and resting. Within the Alki neighborhood is Schmitz Park, the only old-growth forest in Seattle. Other parks in the Alki neighborhood: Me Kwa Mooks, Whale Tail Park, Alki Playground, Bar-S Baseball Field. Alki Beach is also a city park.

Due to the popularity of Alki Beach in 1902, the electric street railway line was extended from downtown Seattle to this destination. In 1907, at Duwamish Head, Charles I.D. Looff built an amusement park atop pilings called Luna Park, Seattle. This park, named after one of the amusement parks at Coney Island in New York, included a German carousel, Ferris wheel, rollercoaster, and a boat chute ride. It also included Powers Natatorium and Bathhouse, which included heated saltwater pools. In 1954 the park burned. The pilings can still be seen today at low tide off of the point.

Back to:  All West Seattle Condos