The Delridge neighborhood is located in West Seattle.  Condos for sale in Delridge include foreclosures (bank-owned condos), short sales, and traditional resale and new construction condos.

If you're looking for a private school, check out Northwest Montessori School. It is at 7344 35th Ave SW in the southwest of Walt Hundley Playfield. Northwest Montessori School (northwestmontessori.org) has a 9 to 1 student-teacher ratio and 144 students in PK, K-6. Another private school is Community School-West Seattle. It is at 9450 22nd Ave SW in the east of Roxhill Park. Community School-West Seattle (cswsplay.org) is a private preschool with a 5 to 1 student-teacher ratio and 18 students in grades PK, K-1. And Blue Skies Montessori Preschool (Private PK-K, blueskiesmontessori.org) is at 2808 SW Holden St #3506 in the north of E.C. Hughes Playground.

For you to spend the night with delicious food with live music, check out Skylark Cafe and Club at 3803 Delridge Way in northern Delridge. Skylark Cafe and Club (206-935-2111, skylarkcafe.com) offers smoked brisket salad, pastrami, bacon cheddar burger, draft beers, cocktails, wine, and more. They also have new patio seating, and they accept orders for delivery.  There's another bar with outdoor seating named Ounces Taproom & Beer Garden. It is at 3809 Delridge Way SW near Skylark Cafe & Club. Ounces Taproom & Beer Garden (206-420-1837, ounceswestseattle.com) has indoor and outdoor seating, food truck, beers, ciders & wine on 30 taps. If you love donuts, visit the best donut store in Seattle named 9th and Hennepin Donuts (206-459-5012, 9thandhennepin.com). It is at 5604 Delridge Way SW near World Kids - Delridge. In southern Delridge, you will find a Shopping mall named Westwood Village (206-322-1610, westwoodvillagecenter.com). It is at 2600 SW Barton St in the north of Roxhill Park. To see today's condo listings in Delridge, Seattle, please click the link below.

Delridge is a large area that runs North and South along Delridge Way SW. Starting at the West Seattle Bridge, Delridge runs almost to White Center on the southern border of West Seattle. A major route for getting into and out of West Seattle, Delridge has good bus service and crosses many other neighborhoods. Homes are a mix of new and old, and there are some condos as well. Delridge real estate prices are some of the most affordable in West Seattle.

Delridge is a district in West Seattle, Washington, United States that stretches along Delridge Way, an arterial that follows the eastern slope of the valley of Longfellow Creek, from near its source just within the southern city limits north to the West Seattle Bridge over the Duwamish River.

The City of Seattle also uses the term Delridge more loosely to describe an informal collection of neighborhoods near the Delridge valley. This area is not precisely defined, but often is considered to be bounded by the Duwamish River to the north and east, unincorporated White Center to the south, and West Seattle to the west along 35th Avenue SW. That area includes (north to south, east to west) the Pigeon Point, Youngstown, Puget Ridge, Riverview, High Point, Highland Park, Westwood, and Roxhill neighborhoods, and some industrial areas near the river.

Pigeon Point is the northern end of the bluff above the Duwamish, east of the old Youngstown neighborhood that surrounds the steel mill, in what real estate listings often now call North Delridge. South Delridge has also replaced Westwood on some maps, but neither of the new half-Delridge terms have entered common speech among longtime area residents.

Boeing Hill is the steep forested slope up which Highland Park Way courses. Like other nearby areas outside Delridge's own Longfellow Creek valley, this large greenbelt on the Duwamish's west bank is sometimes included in "Delridge Neighborhoods" in recent City maps and documents, as are the industrial area north of Spokane Street, Harbor Island, and the northern part of the heavy-industrial zone east of West Marginal Way along the lower Duwamish Waterway serving the Industrial District. 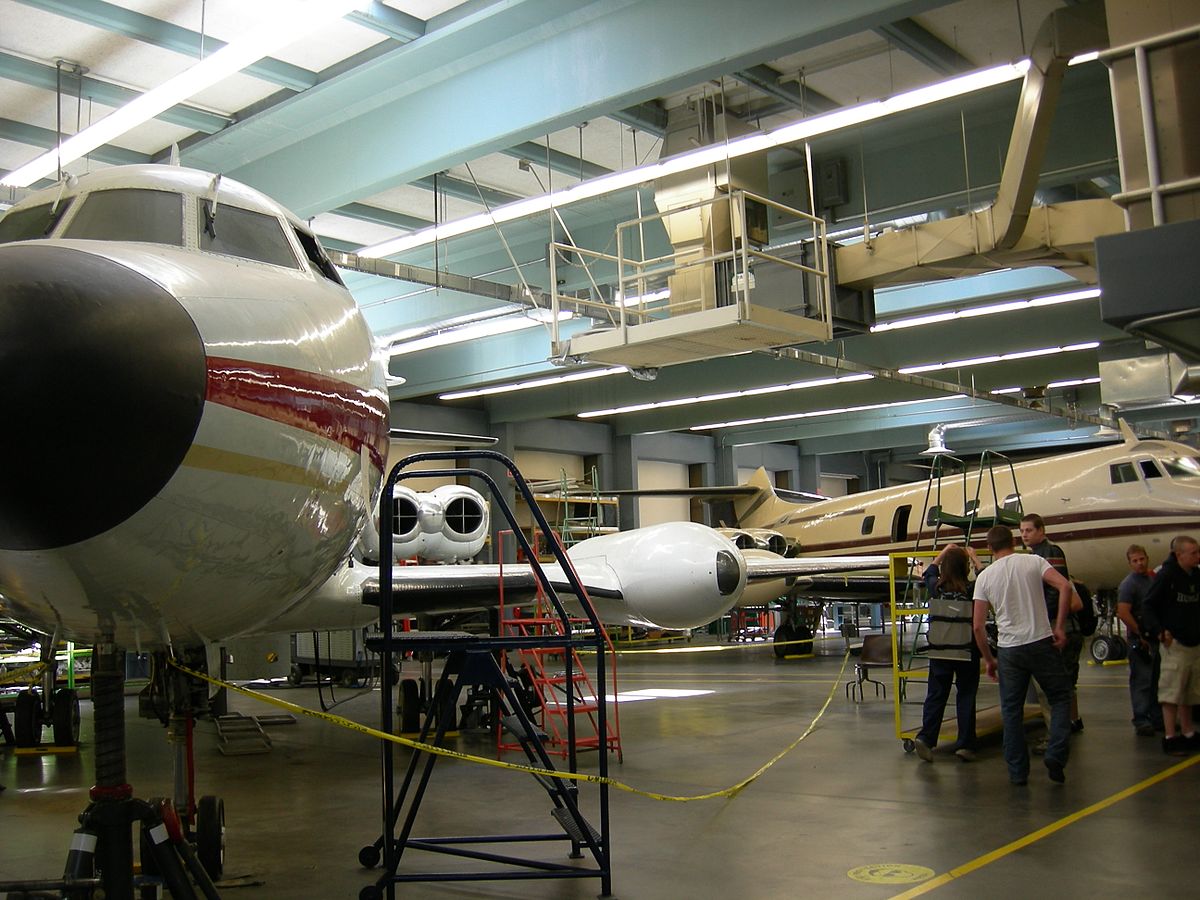 Cottage Grove is an area originally platted by Puget Mill Company between 1918 and 1923. It is generally bounded on the north by SW Genesee St, on the west by West Seattle Golf Course, on the south by SW Juneau St and on the east by 21st Ave SW. It is the area immediately south and adjacent to Youngstown. It is sometimes referred to as Youngstown. For example, the Youngstown Cultural Arts Center is actually in Cottage Grove.

High Point is so named because it is the highest point of land in Seattle, 520 feet (158 m) above sea level. It is most well known for the recently demolished World War II temporary worker housing project of the same name that for five decades (1952–2002) served as low income housing, in particular for many refugees and immigrants when they first arrived in Seattle.

Highland Park is traditionally a working-class neighborhood, due to its proximity to Boeing Field and other employers in the Industrial District. As with White Center immediately to the south, it now features wide demographic and ethnic diversity. Westcrest Park is adjacent to the West Seattle Reservoir. It offers an off-leash dog area.

The Pigeon Point neighborhood is located on a high bluff directly south of the West Seattle Bridge at the south end of Elliott Bay. Boundaries include SW Spokane Street on the north, Delridge Way SW on the west, West Marginal Way SW and the Duwamish Waterway on the east, and Puget Park/SW Oregon Street on the south. Pigeon Point is home to Pathfinder K-8 at Cooper. 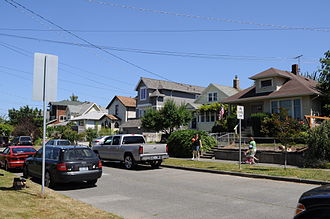 The Puget Ridge neighborhood is located south of Pigeon Point and is filled with and surrounded by abundant greenspace. Boundaries include 21st Ave SW on the west, 16th Ave SW on the east, SW Dawson St on the north, and SW Orchard St to the south. Puget Ridge is the home of Puget Creek, Puget Park, Puget Ridge Edible Park, and Sanislo Elementary School.

The Riverview neighborhood is just south of South Seattle College, east 16th Ave SW and north of Holden St. The West Duwamish Greenbelt make up the northern and western boundaries. Riverview is home to Riverview Playfield park, which has multiple tennis courts, ballfields, soccer fields, and a football field.

Roxhill is mostly residential areas, with a focal point of retail commerce. The neighborhood includes green spaces such as Roxhill Park, through which Longfellow Creek flows.

The partially restored wetland source of Longfellow Creek is in Westwood.

A "big box" plaza called Westwood Village has expanded in recent years. Stores include Target, Bed Bath and Beyond, Staples and Marshall's.

Many new town homes are being developed in this neighborhood.

The Youngstown neighborhood is the dell through which Longfellow Creek flows to the mudflats of the Duwamish River estuary. The neighborhood was rough and rowdy in the early years of White settlement, built in the 1900s for the immigrant steelworkers at nearby Seattle Steel (long thereafter Bethlehem Steel, now Nucor Steel). The Youngstown Cultural Arts Center (1999) opened in 2006, developed by the city-sponsored nonprofit Delridge Neighborhoods Development Association in the old Frank B. Cooper School (Youngstown School, 1917, renamed 1939) on Delridge Way. The school is listed on the National Register of Historic Places. 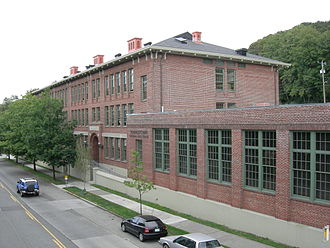